Even with a falling case trend of recent Covid-19 statistics, the courts around the state are in phased reopening status, a daily snapshot of which can be found at the link at the end of this update. The Supreme Court of Florida's evolving Emergency Procedures orders have focused on increasing the resolution of cases by shifting as many of them as possible into a virtual environment with remote technology, and specifically "Alternative Dispute Resolution proceedings." This is good news for parties and their counsel who can't get to a jury just yet. Remember, some 98% of cases settle before trial. A few circuits have engaged in the limited pilot program of remote trials with mixed reviews. At present, all courts remain at either Phase 1 or 2 in this continuing pandemic. As a reminder, Phase 1 means in -person contact is inadvisable, court facilities are effectively closed to the public, and in-person proceedings are rare. Phase 2 encompasses limited in-person contact is authorized for certain purposes and/or requires use of protective measures. Phase 3 states in-person contact is more broadly authorized and protective measures are relaxed. Finally, one day (hopefully next year) we will get to Phase 4 when COVID-19 no longer presents a significant risk to public health and safety. In the meantime, call your mediator and get those pending matters settled! See more here in this updated color-coded guide-- Court Phased Opening Status 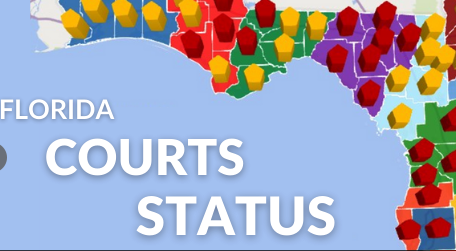 Posted by LAWRENCE KOLIN at 1:08 PM

This week, the Supreme Court of Florida amended guidelines for the four-phased timeline that will govern the return to normal statewide court operations. The four phases were established in prior orders issued since the state courts began pandemic operations in March, all based on recommendations of a COVID-19 Workgroup and general public health guidelines. The Workgroup’s mission is to find ways for courts to operate as fully as possible during each phase of the pandemic. The Workgroup is chaired by Ninth Circuit Judge Lisa Munyon from Orlando. The amendments pertain to the so-called Comprehensive Measures and the Public Health & Safety Precautions that provide standards for pandemic operations in the state courts. They make the following major changes: 1) Provide updated criteria for the transition to different phases 2) Require a human resources policy at each court to address potential COVID-19 exposure of court employees and judges 3) Update health screening criteria for entry into a courthouse  4) Provide updated guidance for courts in monitoring local conditions and public health data when expanding in-person proceedings and 5) Provide a methodology to determine deteriorating local health conditions that would require an amendment to a local operational plan or a return to an earlier phase. Florida’s courts have been operating under emergency guidelines since March when the court suspended jury trials and took other actions restricting potential disease spreading activities in the state courts. Some limited jury trials have resumed in parts of the state using remote technology for all or part of the proceedings (refer to my prior post) See more in revision 6 of the COVID-19 admin order here-- https://tinyurl.com/yywqmeb6 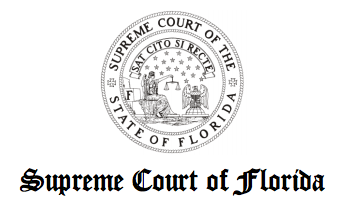 Posted by LAWRENCE KOLIN at 6:41 PM

No Takers On Virtual Trials In Orlando

While the 4th and 11th Judicial Circuits of Florida have utilized remote technology in selecting jurors and trying cases during COVID-19 court closures, the 9th Judicial Circuit has yet to attract parties and counsel despite its selection for the pilot program authorized by the Supreme Court of Florida. As such, the court has even created wanted posters:
The Ninth Judicial Circuit Courts have been selected as one of only five (5) sites in the State for the Remote Civil Jury Trial Pilot Project!*

Civil jury cases that meet the following five (5) criteria: Two (2) parties only; In-person jury selection may be accomplished in two (2) hours or less for each party; The evidentiary portion of trial can be completed remotely in less than two (2) days via Zoom, Teams or WebEx (instruction, closings and deliberations to occur in person); The case is ready for trial in July 2020; and, Both parties consent to a remote trial in the pilot project and waive any appellate issue as to the manner in which the case was tried. If you believe you have a case that meets all the criteria, and you want to be on the cutting edge of trial law in the entire United States (maybe even the whole world!), contact your division trial judge in Orange or Osceola for more details immediately. There are limited spots for this opportunity! All trials must be completed by October 2, 2020. Be among the very first in the Central Florida community to try a case remotely! If you have any questions about the Civil Jury Trial Pilot Project, please contact Judge Lisa Munyon at 40orange@ninthcircuit.org
*For additional details, see Fla. S. Ct. AOSC20-31 and your Orange/Osceola division trial judge.
So far, the results from other jurisdictions have been encouraging with some anecdotes to be sure! See more here-- https://tinyurl.com/yyv73smk
Posted by LAWRENCE KOLIN at 2:02 PM

The ADR Rules & Policy Committee of The Supreme Court of Florida has petitioned the court for the passage of amendments that would require all mediators who mediate actions filed and pending in any Florida court be subject to Parts II, Standards of Professional Conduct (ethical standards), and III, Discipline (disciplinary process), of the Florida Rules for Certified and Court-Appointed Mediators, regardless of whether or not a court order of referral has been issued. The Committee also recommends the addition of corresponding language to Rules 10.200 and 10.700, Florida Rules for Certified and Court-Appointed Mediators. The amendments are designed to remedy two shortcomings in the existing rules. First, mediators who are not certified are currently not subject to the rules if they mediate a filed court action before an order of referral is issued. Second, although it is the Committee’s opinion that uncertified mediators selected by the parties, but not appointed by a specific court order after review by the presiding judge as required by the procedural rules, are subject to the ethical standards and disciplinary process, the Committee believes there is a dispute regarding whether a general order of referral suffices to constitute a court appointment. This petition is designed to remedy those issues. The amendments submitted in this petition originated in 2017 as a Committee proposal that would have required all mediators of state court trial and appellate cases be Florida Supreme Court certified, with appointment restricted to their subject matter areas of mediator certification (mandatory certification was also supported by a majority of the Executive Council of The Alternative Dispute Resolution Section of The Florida Bar). Comments must be filed by July 31, 2020, after an extension was granted. See more here-- https://bit.ly/36ZMzIz

Posted by LAWRENCE KOLIN at 6:22 PM

Please take note this morning that everyone entering the courthouses in Orlando and Kissimmee will be required to wear a mask and undergo a health screening with a temperature check before entering the building. Masks shall be worn in all public areas of the court facility, including courtrooms or hearing rooms, unless the Judge or Judicial officer authorizes its removal. Per the Administrative Order by Chief Judge Myers, all persons will be checked for their body temperature using an infrared or other non-contact temperature device before entrance to a court facility. Any person who registers a body temperature of 100.4 degrees or greater shall not be permitted to enter the court facility. In the event an individual refuses to undergo a health screening or temperature check, or refuses to wear a mask for entrance to the court facility, the security personnel or other person performing the health/temperature checks shall attempt to obtain and record the same information described above. Once the information is obtained, the information shall be provided to the appropriate Judge, Judicial Officer, Clerk, or other court facility occupant so that alternate arrangements can be made for the person, such as a remote appearance, rescheduling a hearing, or other measures, as necessary. In regard to civil proceedings, according to last week's judicial town hall meeting, remote hearings are still a priority and dispute resolution via electronic means is still encouraged during COVID-19. UPDATE: Court returned to Phase 1 restrictions due to spiking Coronavirus numbers June 23, 2020. See full order here- https://bit.ly/2yPCZLA 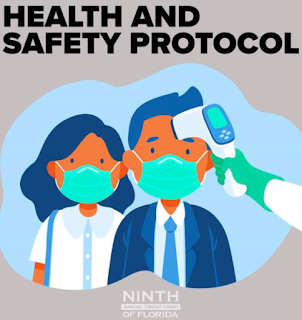 This week, the Chief Justice of the Supreme Court of Florida acted on the recommendations of a statewide Court Continuity Workgroup, issuing an amended administrative emergency order increasing the list of proceedings state courts will accomplish by remote technology during the Coronavirus pandemic. As such, jury trials in Florida are suspended until July 2nd and other deadlines are pushed back until following the July 4th holiday weekend. The court recognized that in-person jury trials pose a special hazard because they can expose jurors and other courtroom participants to a risk of infection. Future extensions will be considered, if needed. Of interest to followers of this blog, the order especially focuses on increasing the resolution of cases by shifting as many of them as possible into a virtual environment with remote technology, and specifically "Alternative Dispute Resolution proceedings." Case types listed in the order will be held by telephone or other electronic means. Of course, online ADR or ODR has been in full effect since this all started using various existing commercial platforms like WebEx, Zoom and GotoMeeting. Additionally, the Continuity Workgroup that I blogged about last month was asked to submit recommendations as they are developed to guide a phased return to full court operations. The expanded list of essential proceedings adds to earlier efforts to mitigate the impact of Coronavirus while letting courts operate in a way consistent with public safety. Florida’s courts have followed emergency guidelines since a March 13th order, when jury trials were first suspended and actions restricting in-person proceedings were implemented to enforce social distancing. Subsequent orders extended these limits through the end of May, subject to future orders made necessary by the pandemic. Chaired by Orlando Circuit Judge Lisa Munyon, the Court Continuity Workgroup’s mission includes examining the current status of all court proceedings statewide and proposing methods for resolving cases with remote technology and other new procedures that may remain when all this is over. According to the court, the move toward more virtual proceedings is a major historical shift in state court operations, which have relied heavily on in-person hearings in the 175 years Florida has been a state. See more in the latest Administrative Order here-- https://tinyurl.com/yb7jypo9